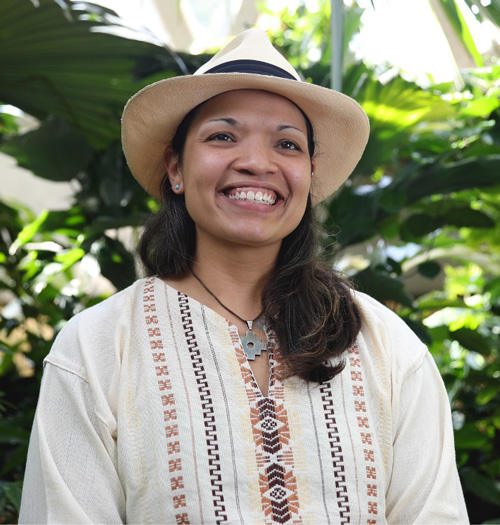 Chef Andrea Murdoch is an Andean Native born in Caracas Venezuela.  Murdoch is using food to trace her own culture while educating the public about the expansive world of Indigenous food systems. After being classically trained as a pastry chef at The Culinary Institute of America, Murdoch started exploring Indigenous flavors and origins independently for her business Four Directions Cuisine, LLC which launched in Denver, CO November 2017.

The four main pillars of her business are sourcing locally, sourcing Indigenously, education and community work.  In Murdoch’s interpretation of Indigenous cuisine, she starts cultural conversations and serves up her personal experiences in the form of food.

Organization: Co-founder of Across Our Kitchen Tables

Claudia Serrato is an Indigenous culinary anthropologist, a public scholar, a doctoral candidate, and a professor of ethnic studies.

She was born and raised in Los Angeles, California predominantly on a P’urhépecha, Huasteca, and Zacateco diet. At an early age, she began to cook alongside her elders, gaining time-tested food knowledge.

Claudia centered these knowledges in her academic studies, arriving to the conclusion in 2007 that decolonizing the diet was essential to the survival of Indigenous foods and foodways.

This granted her numerous opportunities to present, speak, publish, and facilitate workshops in her community, educational institutions, and conferences gaining national and public recognition.

In addition, since 2014 Claudia has been actively involved in the Native food justice and sovereignty movement and has been cooking alongside prominent Indigenous chefs at cultural food gatherings, summits, and pop-ups throughout Turtle Island (North America).

Reclamation of ancestral education is a critical part of reversing the damage of colonialism and forced assimilation, and food is at the heart of this reclamation. NāTIFS will drive sustainable economic empowerment and prosperity into tribal areas through a reimagined North American food system that also addresses the health impacts of injustice.

Select ‘Event Activities Co-Chairs’ in the ‘Who’s This For’ dropdown menu in the form below to contact these co-chairs.